Consulting Case Interview Math: Everything You Need to Know
Skip to main content

Consulting math will show up in every case interview. If you cannot solve case interview math problems quickly, efficiently, and correctly, you will not be able to pass your consulting interviews and land a consulting job offer.

Consulting case interview math may seem difficult and intimidating, especially for candidates without strong quantitative backgrounds, but the math itself is very basic and simple.

You should be familiar with the following math fundamentals:

Fractions are numbers expressed as n/d. Examples include: 1/2, 2/3, and 3/4. You should know how to do the following calculations with fractions:

Decimals are numbers in which the positioning of the period or decimal point determines the value of the digits.

You should know how to do the following calculations with decimals:

You should also be familiar with scientific notation, which is a decimal expressed as the product of a number with only one digit to the left of the decimal point and a power of 10.

Percentages are numbers expressed out of 100 or per hundred.

You should know the formula for percent change.

The price increased by 20%.

A ratio is a relation between two numbers. Examples include:

A proportion is a relation between two equal ratios. Examples include:

Example: A factory requires 2 supervisors for every 15 workers. If a factory has 45 workers, how many supervisors are required?

We know that the ratio of supervisors to workers is 2 to 15, or 1 supervisor for every 7.5 workers.

To find the number of supervisors required, we can divide 45 workers by 7.5 to get 6. Therefore, 6 supervisors are required.

Only very basic statistics knowledge is needed for case interviews. You should be familiar with four important concepts:

The most important concept is calculating the mean or average of a set of numbers.

Example: If our three largest competitors are paying $10 per hour, $11 per hour, and $15 per hour for labor. What should we expect our average labor cost to be?

The average cost of labor is $12 per hour.

You should also be able to calculate a weighted average, which is a calculation that takes into account the varying degrees of importance of numbers in a data set.

The overall profit margin of the company is 32%.

You should also understand the concept of a standard deviation, which is a measure of how spread out the distribution of data is from the mean or average. You won’t need to ever calculate this in an interview, but should be familiar with how to interpret it.

Finally, know how to calculate expected value, which is a predicted value calculated as the sum of all possible values multiplied by the probability of occurrence.

The expected value of sales is $72M in the first year.

A variable is a letter or symbol that represents an unknown quantity.

Only very basic algebra is required for case interviews. You should know how to solve a linear equation that has one unknown.

To solve a linear equation with one unknown, you will need to isolate the unknown variable onto one side of the equation.

To solve this question:

For each type of problem, we’ll go through what formulas and concepts you need to know and go through a few practice questions.

There are four basic profit formulas that you should know, which can be put together and simplified into a single comprehensive equation for profit. 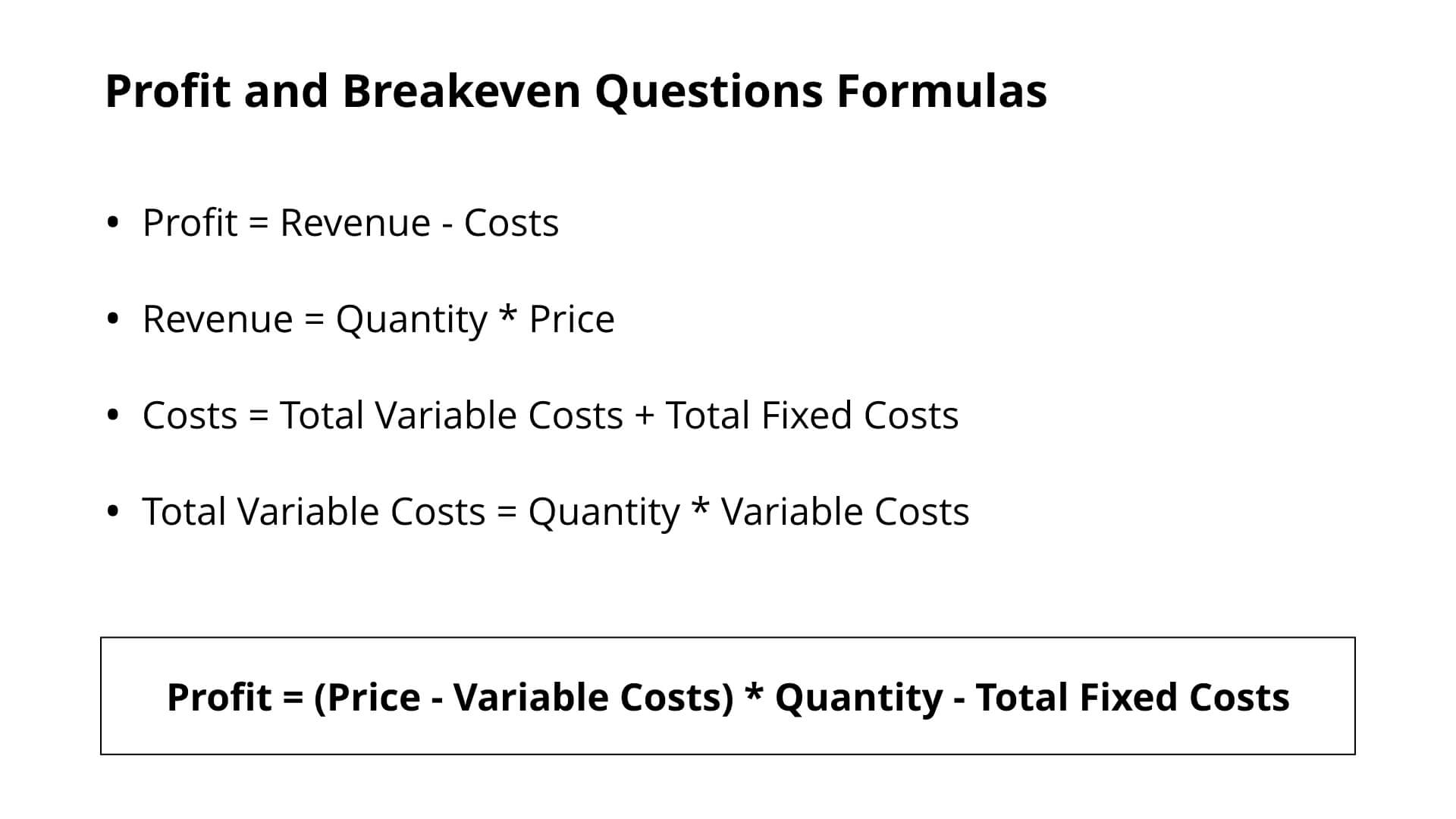 Example: A pizza store sells 100,000 pizzas per year at a price of $10 each. Assume that each pizza costs $4 to produce. The store pays $150K per year in rent and hires two employees at a salary of $75K per year. What is the pizza store’s annual revenues, costs, and profit?

To solve this, we simply need to use our various profit formulas.

From our calculations, we know that annual revenues are $1M, annual costs are $700K, and annual profit is $300K.

Example: What is the profit margin of the pizza store in the previous example?

To solve this, we simply need to use the profit margin formula.

Therefore, the pizza store has a profit margin of 30%.

Example: How many pizzas does the pizza store in the previous example need to sell in order to break even?

Therefore, the pizza store needs to sell 50,000 pizzas in order to break even.

Investing is the use of cash today in the hopes of creating wealth in the future. For case interviews, examples of investments you’ll see include:

Investment questions will typically ask you to calculate a return on investment, known as ROI, and the time required to break even, also known as the payback period.

You will need to know the following two formulas:

It will take 5 years for the software company to recover the cost of the investment.

Example: A private equity firm purchases a roofing tile distributor for $100M. After growing the company’s revenues within the first few years, the company was then sold for $130M. What was the return on investment?

The private equity firm has generated a 30% return on investment over the time period.

Operations problems typically deal with production and the usage of machinery or plants. There are two key formulas you need to know:

Example: If it takes a factory 2 hours to produce 100 cars, how many cars can the factory produce in a full day?

Assuming the factory operates for 24 hours, we can calculate the hourly production rate by taking 100 cars and dividing it by 2 hours. This gives us a rate of 50 cars per hour.

Therefore, the factory’s maximum output in a day is 50 cars per hour times 24 hours. This gives us 1,200 cars per day.

Example: If the factory produces 900 cars per day due to lunch breaks and shift changes, what is the factory’s utilization?

To find utilization, we divide the output by the maximum possible output. 900 cars per day divided by 1,200 cars per day gives us 75%. The factory is operating at 75% efficiency.

There are ten types of charts and graphs you should be familiar with:

You can watch the video below for a review on how to interpret each of these.

Market sizing questions ask you to determine the size of a particular market.

There are two main approaches to solving market sizing questions:

Example: What is the market size of tires for personal vehicles in the United States?

To solve this market sizing question, we can use a top-down approach:

Let’s start with a United States population size of 320M. We can estimate that the average household has 2.5 people. Therefore, there are 320M / 2.5 = 128M households in the US.

Among households that own a car, the average number of cars owned is about 1.5 cars per household. Therefore, 1.5 cars * 96M households = 144M cars.

Tires are replaced approximately once every six years. Therefore, in a given year, 576M tires / 6 = 96M tires are sold.

The market size of tires for personal vehicles in the United States is $9.6B.

1. Develop a structure before doing math: Do not begin doing any math calculations until you have developed an approach or structure. This will prevent you from making unnecessary calculations and help you avoid making math mistakes.

2. Round numbers when appropriate: Use round numbers to keep the math easy and reduce the likelihood that you make a calculation error.

For example, if you making assumptions about the size of the United States population, use 320 million instead of 319 million.

You don’t want to round too much since this may signal to the interviewer that you are uncomfortable performing math calculations if the numbers are not easy and round. However, rounding occasionally can help simplify the calculations and reduce the likelihood that you make a calculation error.

3. Use abbreviations for large numbers: If you are working with numbers in the thousands, millions, billions, or trillions, use abbreviations rather than writing out all of the zeroes.

For example, if an investment is expected to grow at 9%, then it would take approximately 72 / 9 = 8 years for the investment to double.

5. Sense check your numbers along the way: Accidentally missing zeroes or adding extra zeroes during your calculations is the most common math mistake. After each step of a math calculation, you can do a quick sense check to see if your answer is the right order of magnitude.

For example, if you are multiplying 125 million by 24, you should expect your answer to be in the billions because 100 million * 20 = 2 billion.

If you found this article helpful, you’ll love our comprehensive case interview course. The material in the course has helped 6,000+ students across 13+ countries land offers at top-tier consulting firms such as McKinsey, BCG, and Bain.

Try the course for free today.