Big Four Accounting Firms: Which is Best for Consulting?
Skip to main content

Who are the Big Four Accounting Firms?

The Big Four accounting firms are Deloitte, PricewaterhouseCoopers (PwC), Ernst & Young (EY), and KPMG. They are professional services firms that are renowned worldwide for their reputation and prestige.

These firms were founded as early as the 1800s as small accounting firms, but steadily grew over time through a series of mergers and acquisitions. Today, they are massive professional services firms. In 2019, the Big Four accounting firms had over $154B in annual revenue. 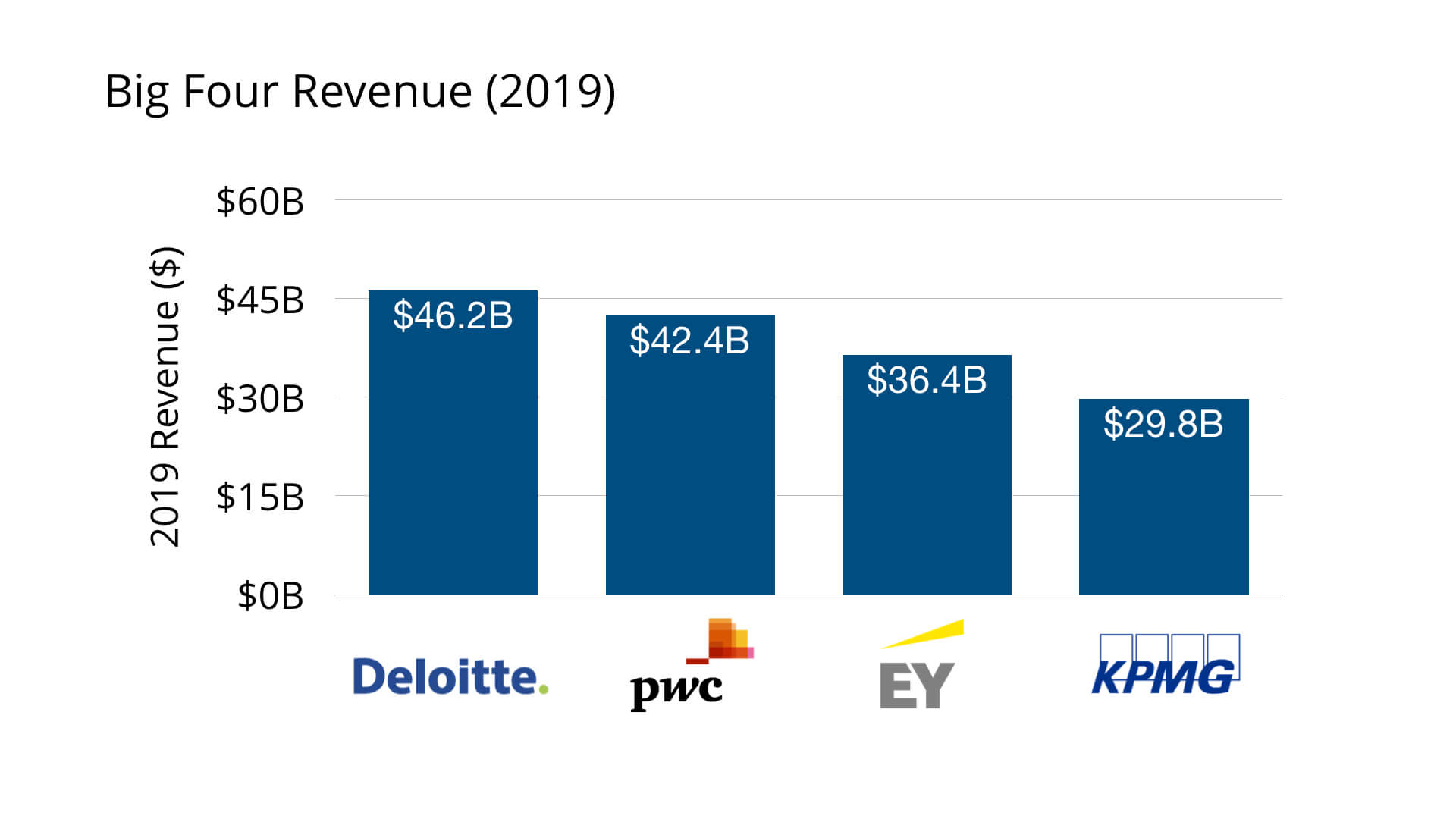 The Big Four provide three main types of professional services for their clients: 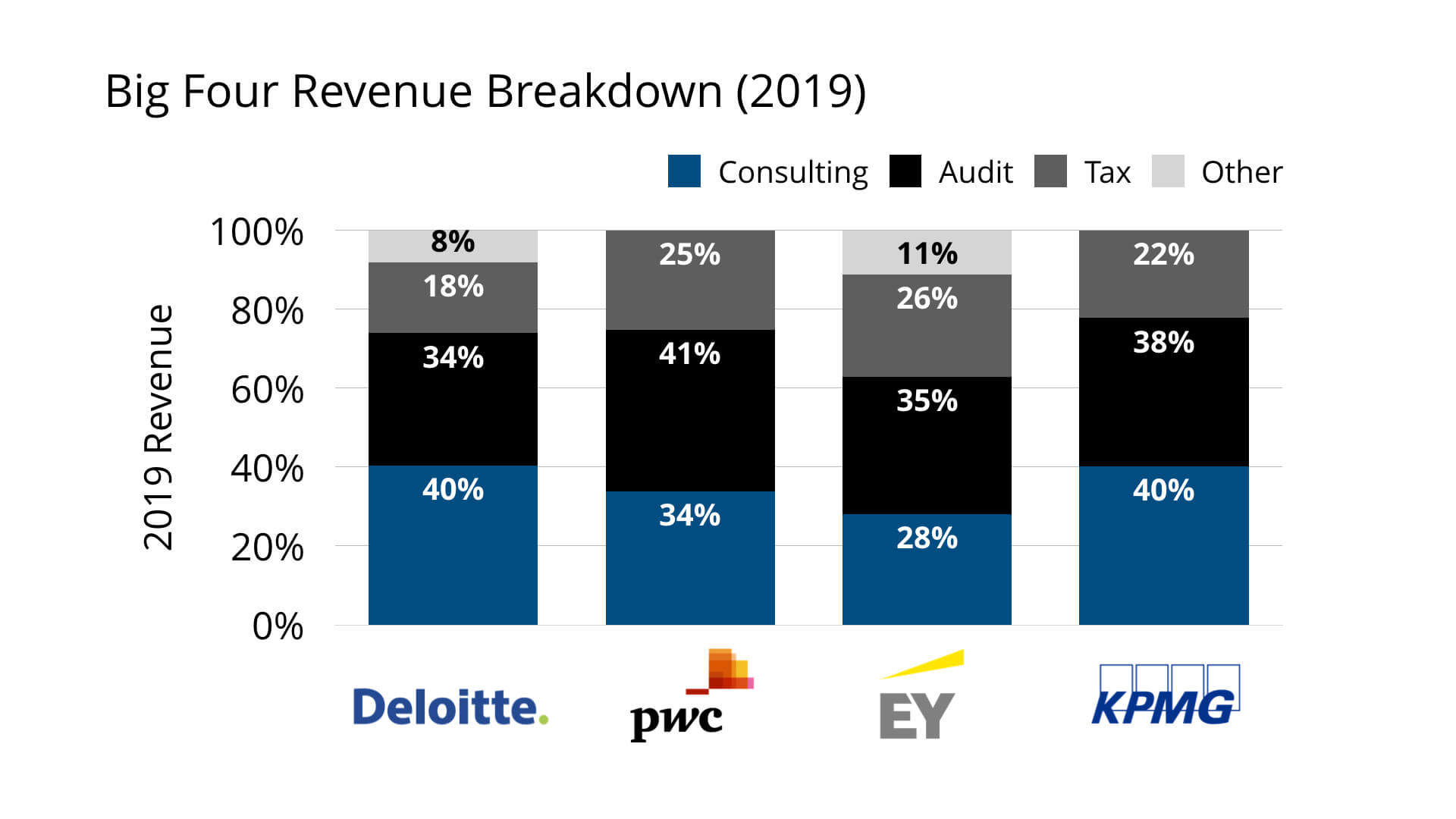 Deloitte is the largest of the Big Four accounting firms with over $46B in annual revenue and 312,000 employees in 2019. They are headquartered in London, United Kingdom.

The firm was founded by William Welch Deloitte in 1845. It merged with Haskins & Sells in 1972, Touche Ross in 1989, and part of Arthur Andersen in 2002. Deloitte has made a number of acquisitions over time, most notably acquiring Monitor Group, a large management consulting firm, in 2013.

Deloitte has garnered many different awards and recognitions:

PwC is the second largest of the Big Four with over $42B in annual revenue and 276,000 employees in 2019. They are headquartered in London, United Kingdom.

The firm was created in 1998 when Coopers & Lybrand merged with Price Waterhouse. These two firms were originally founded in 1854 and 1849 respectively by William Cooper and Samuel Lowell Price.

PwC is organized into three different service lines: assurance, advisory, and tax. They have built up their consulting practice through acquisitions, most notably acquiring Paragon Consulting Group in 2009, part of BearingPoint in 2009, PRTM in 2011, and Booz & Company in 2014.

PwC has garnered many different awards and recognitions:

EY is the third largest of the Big Four with over $36B in annual revenue and 270,000 employees in 2019. They are headquartered in London, United Kingdom.

The firm was created in 1989 by the merger of two accounting firms, Ernst & Whinney and Arthur Young & Co.

EY provides four major services: assurance, tax, advisory, and transaction advisory services. However, they have expanded into markets adjacent to accounting, such as strategy, operations, HR, technology, and financial services consulting. They acquired the Parthenon Group in 2014 to expand their advisory services.

PwC has garnered many different awards and recognitions:

KPMG is the smallest of the Big Four, but still had over $29B in annual revenue and 219,000 employees in 2019. They are headquartered in Amstelveen, Netherlands.

KPMG has three lines of services: financial audit, tax, and advisory. They have made a number of acquisitions of consulting firms including Zanett in 2014 and Beacon Partners in 2015.

KPMG has garnered many different awards and recognitions:

Do the Big Four Accounting Firms do Consulting?

Although the Big Four accounting firms are primarily known for their audit and tax services, they all do have a consulting or advisory arm.

Therefore, if you are interested in management or strategy consulting, this specific type of work makes up a much smaller percentage of the Big Four’s revenues compared to the other types of consulting.

If you’re looking to do management consulting at the Big Four, you should aim for the following groups:

MBB stands for McKinsey, BCG, and Bain. These three firms are also known as the big three consulting firms because they are the largest and most prestigious management consulting firms.

There are six main differences between the consulting work that the Big Four accounting firms do versus MBB.

1. The Big Four focus more on implementation and less on strategy

MBB, on the other hand, is hired almost exclusively for their strategy work.

However, the Big Four does do some strategy work, especially in the management consulting firms that the Big Four have acquired.

2. The Big Four work with middle-management rather than C-suite

Since implementation tends to be more straight forward and less controversial than dictating the strategy of a company, the Big Four accounting firms tend to work more with middle-management. The C-suite usually is only involved when making strategic decisions that affect the entire company.

3. The Big Four offers a wider scope of services

MBB specializes in strategy and operations work. They have limited expertise or resources in technology consulting, implementation, financial advisory consulting, and risk and compliance consulting.

The Big Four accounting firms, on the other hand, has much more resources and expertise in these areas. Therefore, the Big Four offers clients a wider scope of services. While MBB typically only sells strategy work, the Big Four can sell strategy and implementation all together.

4. The Big Four have lower client billing rates and consequently pay their consultants less than MBB

Since the Big Four accounting firms do not have as much prestige as MBB for strategy work, they charge much lower billing rates to their clients. As a consequence of this, Big Four consulting salaries tend to be lower than salaries at MBB.

5. You specialize more quickly in the Big Four than at MBB

6. The Big Four has a slower career progression than MBB

If you found this article helpful, you’ll love our comprehensive case interview course. The material in the course has helped 6,000+ students across 13+ countries land offers at top-tier consulting firms such as McKinsey, BCG, and Bain.

Try the course for free today.